To Lord’s on Monday.  I had been torn between Chesterfield (where Northants were playing Derbyshire) and Lord’s (where Leicestershire were playing Middlesex), but with one eye on the weather forecast, and mindful of the fact that I haven’t been to Lord’s this season nor last, I chose (against most  instincts) to head South.

I’m glad I did.  The Spirit of Cricket – elusive ghost! – may be found in the quiet places, but sometimes she is hidden in plain view, in the place you most expect her.

Lord’s is – as every tea towel, t-shirt and pen in the gift shop will tell you – the Home of Cricket, but sometimes, when I’ve visited, Cricket has not been at home – or not at home to me.  When I lived in London I often used to slip away at lunchtime on a Friday to catch an afternoon of a county match, and on a dull day, or if the game had reached a point where it seemed inconsequential what happened next, the shuttered bars and roped-off stands seemed to say that Cricket was saving herself for a grander occasion, a more opulent crowd.

On Monday though, and I don’t know why – the bright white light we should have had for cricket back  in flaming June?  the joy of being not underground on Monday morning, but in the light and breeze? – the whole thing felt as grand as any Test I’ve been to there, though the sheer grandeur of the place does tend to make those of us in the cheap seats feel like a troop of monkeys overrunning the Parthenon.

Lord’s may be the Home of Cricket, but it’s also the home of Middlesex, though I always feel that they are reluctantly tolerated lodgers there – poor relations – and never quite at home in the way that other counties are at their home grounds.  I always used to try to catch the Southgate festival, which seemed to suit them better, or at least be more expressive of a county rather than North London, or the MCC in disguise, or the Establishment.

You always know that you are close to Lord’s when a county match is on by the blazers on the tube ( the navy blue double-breasted jobs, with brass buttons, worn with grey slacks and the discreet Middlesex tie), worn by slightly florid men, not long retired from business, you’d say, changing at Baker Street from their homes in – where? – Pinner? Rickmansworth? (those faraway place with strange-sounding names).

And, on the pitch, Middlesex – poor Straussless, Morganless, Finnlesss Middlesex – were no match for the Leicestershire attack – or more precisely Hoggard, who must be able to feel the gravitational pull of the Lord’s slope in his dreams.  Middlesex 161-9 (Hoggard 6-63), then a what-the-heck  flurry of runs from Murtagh and the long-eared, fluffy-tailed Pedro Collins to push back tea time and lift them past 200 and to a consoling  bonus point.

As I reluctantly took my leave, a last look back  – the first over after tea – Boyce (the soul of correctitude) and Smith (straining at the leash) walking out to open as so many have before them, the first long shadows of Autumn just visible, creeping out from under the pavilion.

And always something new at Lord’s, so what is this? The Angel of the South? Christ the Redeemer?  The Spirit of Cricket?  No, the new floodlights. 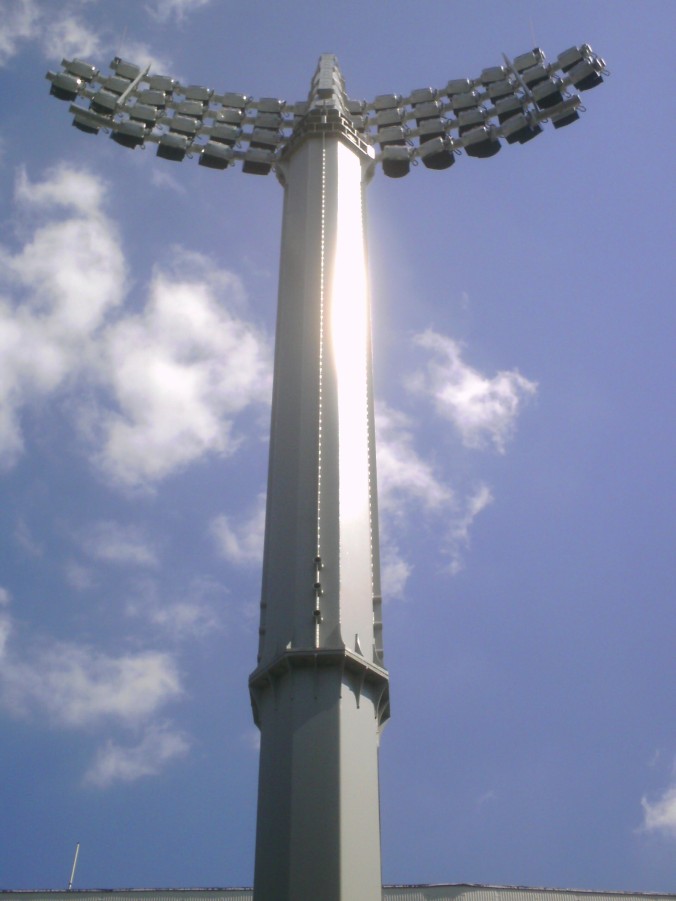 and their base – (I suppose this is the true spirit of Lord’s) –  in a flower bed:

Leicestershire eventually made 282 (much of day 2 washed out), Middlesex replied with 255, leaving Leicestershire to make 192 at lunch on the fourth day, with the incentive of promotion there to make a go of it.  139 for 5 when the rain set in again.

Taylor played both of his typical innings – an unbeaten century in the first innings and out LBW for nought in the second.