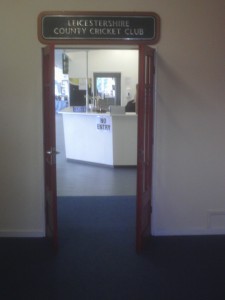 Well, here we are again.  This blog will soon be entering its third year, and this will be the third season I have tried to record for posterity, from the point of view of the man in the crowd with the Thermos and the Playfair.  Trying to do this without too much repetition becomes increasingly difficult, though I hope to compensate by the liberal application of deviation.

If you want to know exactly what happened, of course, there are plenty of other places that can tell you.  Even the Guardian made the first day the lead story in their cricket coverage – though their correspondent wrote mainly about the turmoil in the counties’ respective boardrooms (do cricket clubs have boardrooms – or is that just football?).

But there was some serious cricket on offer.  Leicestershire batted first, and soon found themselves in the familar position of expecting James Taylor to play a big innings to pull them out of a hole.  Taylor has just returned from the West Indies, where he averaged 58.55 for the England Lions, and – equipped with an enviable suntan – looked like a man in form.  He moved swiftly (particularly between the wickets – he ran two fully-run fours) on to 45 before just failing to place the ball over the mid-wicket’s head (to the groans of the crowd).  At 125-6 things looked bleak, but Original Kolpak Claude Henderson (in his testimonial year – how time flies!) and a determined Captain Hoggard dragged things back to 238 all out.

The next day – a hat-trick for Hoggard!  The first at Grace Road for 28 years, apparently.

A Standing Ovation for Hoggard

Glamorgan all out for 146!    Leicestershire 78-5 at the close of play!  As to who is going to win this (as the start of play on the third day approaches), I think the smart money has to be on Leicestershire.  Or possibly Glamorgan.

What else is new?  James Taylor was sporting a new design of helmet.  From a distance it looked like the kind racing cyclists wear.  Perhaps it is aerodynamically designed and grooved so that, if he is hit on the head, the ball will speed straight to the boundary.  It also seemed to reflect the sunlight – which I’d have thought might be offputting for the bowler.  Perhaps it will soon be banned.

The trees around the ground – bare last week – are almost in leaf. 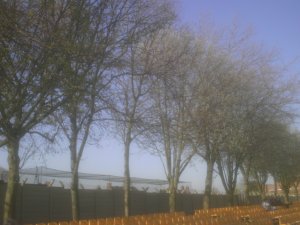