“Which counties do you least like visiting?  Northamptonshire and Leicestershire.  Do I really need to explain why?” – Rob Key, in this month’s Cricketer.

One thing I miss, of course, by my usual, enforced, habit, of watching single days of county cricket is what is often said to be its most attractive feature – the ebb and flow, the fluctuating fortunes.  Admittedly, there is sometimes (as at Trent Bridge the other week) about as much ebb and flow as in the Dead Sea, sometimes a simple torrential rush to an inevitable conclusion.

But last week I was lucky enough to see two days in succession of a Championship match, an ordinary match, no doubt, between two ordinary sides.  After the first two days (a little rain-affected) Gloucestershire had declared on slightly over 500.  Leicestershire’s first choice openers Jefferson and Boyce began on day three with an almost clean slate.

Jefferson (who is in good form) played in his apparently awkward way, as if  playing against children with a child’s bat and giving them a chance through sheer good nature,  Boyce, as always, intelligently and responsibly.  Shortly before lunch, Jefferson went, but – surely – at 195 for no wicket –  the follow-on had been avoided, and the game had been put out of Gloucestershire’s reach?  Other plans needed for Saturday?  Boyce returned to the pavilion at lunchtime to a more informed and appropriate reception than he had received on Sunday. 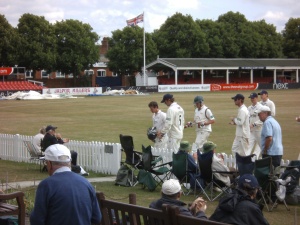 Soon after lunch, Boyce fell and all the dominoes followed – the locum Kabeer, the frustrating Cobb, the jet-lagged McDonald (perhaps, too, dazzled by the bright lights of Grace Road after the humdrum IPL), and all the rest in short order, to finish on 323 shortly after the beginning of the fourth day.

Jefferson and Boyce returned, experiencing, I imagine, a sense of deja vu and a slight weariness.  By mid-afternoon Leicestershire were 134-5, still 47 behind.  The home crowd braced themselves for another defeat, and, quite possibly, the end of any hope of escaping Division Two.

At this point P.G. Dixey joined Jigar Naik at the wicket.  Dixey is a wicket-keeper, with a century for Durham University to his credit, on trial at Leicester, having been released by Kent.  Thanks to Tom New having broken his toe during a pre-match game of football (an accident waiting to happen, I’d say, given some of the tackles I’ve seen going in) Dixey has been given an extended chance to prove himself.

By five o’clock he was 72 not out, having steered the Foxes’ leaky ship to safety with great aplomb, opening his shoulders to clout a great six into the practice ground.  As I applauded, the man next to me, puffing on his pipe, said, with justifiable pride “That’s my boy you know – his mother’s having kittens”.  To me this may all be part of the passing show, but to Dixey it could mean the difference between a career as a professional cricketer and one as … something else.

At five, they shook hands and agreed on a draw, Dixey returning to the pavilion to great acclaim.

Today I visited Rob Key’s other least favourite place to visit, the County Ground at Northampton.  Having watched three days of cricket in six days, I begin to get a sense of how the season might seem to the players, as a sort of oceanic flow rather than a series of discrete occasions.

On the Tuesday Leicestershire had made 313 (P.G. Dixey lbw. b J.D. Middlebrook 0).  Today it was Northamptonshire’s turn to collapse (70-5, with three catches for P.G. Dixey) and the turn of another young batsman (Alex Wakely, with 98) to take them to near-parity on 311.  And who was the well-groomed woman sitting behind me in the crowd?  Wakely’s mother.

2 thoughts on “All Things Are A-Flowing, Sage Heraclitus Says …”