“To the modern reader who is too young to have seen the pageant of Lord’s at its best, i.e. in fine weather on Eton v Harrow, and Oxford v Cambridge match days, it is not easy to convey much, if anything, of the aesthetic pleasure which the sight holds for the onlooker who is bred to enjoy nice things.  ‘Varsity afternoons at Lord’s were the right of fragrant and beautifully-gowned women, with their escorts of well-groomed men, each one tire aux quatre epingles.  It was a joy in itself to try to stroll round Lord’s in less than three-quarters of an hour through the packed and happy crowds, no matter very much which side was ‘on top’, at the moment, all chattering and laughing nineteen and more to the dozen, nothing else in the world mattering.  How I hope that world conditions permit a speedier return to such times than any of us deems likely to-day”  – E.H.D. Sewell, writing in 1946.

Well, it wasn’t quite like that on Sunday, but more so than you might think, and much more so than the last time I attended one of these fixtures, about six years ago.  That game (the new-style  one day ‘Varsity match) was played (as was traditional, for the sake of the country parsons) on a weekday, and was watched by a handful.  The weather was dull, as was the cricket.

I don’t know if it was because it was being played on a Sunday, or that it was the hottest day of the year, or down to some change in the social climate (or perhaps they were still there from the previous day, when – for £17.00 – you could have watched Eton play Harrow) but there were certainly enough “fragrant and beautifully-gowned women” to gladden the heart of old E.H.D. – in fact, I don’t there I’ve ever been to a cricket match before where the women almost outnumbered the men.  What might have puzzled him slightly, as it puzzled me, is that they all appeared to be American, or, if not, Australian or South African. 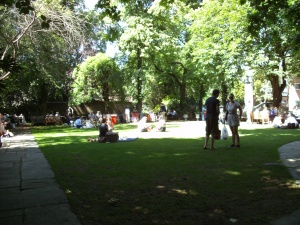 For part of the game I sat behind a group, the boys wearing OUCC blazers, the girls, apparently, Paris Hilton and her entourage.  An American girl and boy were discussing whether South Kensington would be a good place to buy a house (she thought not, because she wouldn’t want to live in the same street as her mother).  The boy seemed to own houses in New York, London and Paris.  This is not the kind of conversation one often hears at Grace Road.  (Even these children of Croesus, incidentally, couldn’t afford the prices at the Lord’s bar and nipped out to the nearest Tesco for a carry-out).

(I’m not implying that these were typical of the crowd, by the way – there were the usual quota of fat blokes with their shirts off in the cheap seats – but it’s a surprise to find them at a cricket match at all.)

The Lord’s shop is now exploiting its heritage by selling Gentlemen v Players t-shirts (£22.00), and there seemed to be some division on the pitch between the serious Players (the ones who appear for the MCCU sides and, in a couple of cases, have county experience) and the amateurs.  There are some who may not  be seeing their names on a big screen again, after their day in the sun –

and some who surely will.

As in the Lancashire league the pros are expected to both make runs and take wickets, and, at the end of the day, Cambridge’s pros Zafar Ansari and Paul Best must have been looking forward to a decent collection when the bucket came round.  These are the two left arm spinners who we met earlier in the season being set on Kevin Pietersen like a couple of Jack Russells.  Since then Ansari has won the Man of the Match award in his 20/20 debut for Surrey.  Best we met before at Grace Road locking horns with Taylor et al. while playing for Warwickshire.

Cambridge batted first and seemed to be progressing too slowly against some useful medium pace from Oxford captain Sharma (a 27 year old New Zealander), losing captain Timms and the semi-pro Hughes.  Ansari came in at 3 and restored order, with support from Anand Ashok.  With the base secure he let loose, particularly against Oxford’s pro, the off-spinner Agarwal, and at one point nearly assassinated me –

Best joined him at third wicket down and – making use of their professional skills – exploited their powerplay to the full, to take the score to 264.  Best scored 61 off 30 balls.

With Agarwal falling early, and the gap between the rate scored and the rate required gaping wider by the over, I left, confident that with Ansari yet to bowl, Cambridge’s total was safe.  Oxford were bowled out for 212 in the 48th over, Ansari’s figures 10-2-19-0 (economy rate 1.90).

Oxford’s fielding was quite lamentable, by the way.  A similar occurence in 1930 prompted a letter to The Times, from Mr. W.B. de Winton, which ended –

“As a fag at school, if I misfielded a ball I was put at the wicket and bowled at with no bat to protect me, and woe betide me if I shirked the ordeal.  A little of this discipline might do good now.”

Before the days of the mania for Health and Safety, of course, which is rotting the moral fibre of the nation etc.  …(cont. p. 94 of the Daily Telegraph).