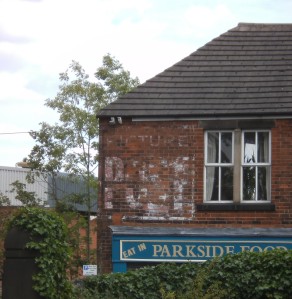 I seem to have been too busy watching cricket recently to write very much about it, or anything else, and the season seems to be hurtling to its conclusion faster than I can keep up with it.  So, in attempt to clear the mounting backlog of matches, here is a largely pictorial account of two of them.

Bedford is one stop further up the line from London than Luton, where I last saw Bedfordshire in action, and is slightly more distinctive of the county and less like a suburb of the capital.

Bedford Modern School is the less well-known brother (a sort of Eric Bedser) of Bedford School. Bedford School has produced many of the current Northamptonshire squad (via a spell with Bedfordshire), not to mention Alistair Cook.  The Modern School can, though, boast of Monty Panesar as a recent sprig.

Like Bedford itself, the ground is rural from one aspect – 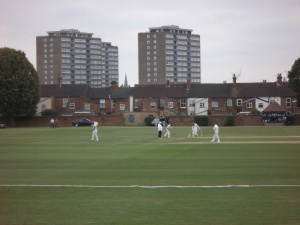 The pavilion is attractive –

and there was a Marquee for the blazers to graze in –

The day was also enlivened by the arrival of a slightly alarming man, clearly some sort of local hero, who arrived with a sheaf of press cuttings about the day he’d scored a century against Johnny Wardle, presumably when Wardle was playing for Cambridgeshire.

Queen’s Park in Chesterfield has, I’m pleased to say, altered little since my visit in July of last year.  One difference though is that, as we are now in the School Holidays, the playground just outside the ground behind one of the wickets was full of children, and there was a miniature railway in operation.

As at Desborough, the club have erected a high net to prevent lofted straight drives from braining some unfortunate infant

Although it wasn’t really that kind of game, a net like this is seen as a challenge by some players, and James Middlebrook almost managed to hit over it a couple of times.

Simply as a game the one at Bedford rather had the edge.  It was the last day of a three day match, and was decided at about half past five, with the result uncertain until the last half hour (Bedfordshire won, I think).  Given fine weather, three days really ought to be enough for a cricket match.

I suppose the four day game does provide better preparation for Test cricket, in the sense that it allows one side to grind out a huge total and then crush the other like a bug.  In this case it was Northamptonshire doing the grinding and crushing, moving from 286-6 to 416-9 dec. to set Derbyshire 493 to win.  Oh for the days of the sporting declaration!

Although Northants’ batting was undeniably impressive, the most entertaining part of the day was when opener Chesney Hughes removed a couple of tail enders with his occasional slow left armers.  Here we see him acknowledging the applause of the crowd –

When Northants declared, a very charming man, who must have been at least seventy, tapped me on the shoulder and asked why the announcer had said that Derbyshire needed 493 when Northants had only scored 416.  When I told him that the score on the board was only the score in the second innings, he thanked me for the explanation and said that it was his first time at the cricket.