(If you don’t feel in the mood for a quiz, by all means feel free simply to enjoy looking at the picture.  Always nice to see a group of cricketers looking well turned out.)

Here we see six members of the same club, who have clearly been putting on their top hats, brushing off their tails, duding up their shirt fronts and polishing their nails, stepping out to breathe an atmosphere that simply reeks of class.  But who are they and where are they going?

I am looking here for

b) The identity of the bareheaded man in the foreground

Some clues would be that c) was the subject of two of most famous passages of descriptive writing (or purple prose, if you don’t appreciate it) in cricket’s history and was described by my Grandfather as the best (or most enjoyable) batsman he ever saw in action;  b) shares a nickname with a current member of the England Lions squad.

Of the two other members of the party that I’ve been able to identify, the young man in spats on the far left of the picture was the only Englishman to have played first class cricket before the First War and after the Second, and ended his career as the scorer for Leicestershire 2nd XI.  The older cove with the cane was the brother of the Governor of South Australia and is said to have deliberately run out his Captain, The Hon. F.S. Jackson, in the 1892 University Match, yelling “Get back, Jacker, I’m set!”.

A special prize of a lifetime’s free subscription to this blog goes to anyone who can identify the other two (about whom I frankly have no idea).

There are people – let us, for the sake of argument, call them me – who dislike music at cricket matches.  Some of them dislike not only the sudden blasts that accompany boundaries and wickets at televised one dayers, but even the playing of  ‘Jerusalem’ before the start of international matches.  How much more dignified it would be if the players took the field to a polite ripple of applause and the faint susurrus of flicked-through Playfairs, they think.  Would anyone who remembered those days have hankered after musical accompaniment?

Well, apparently, yes.  This is from a collection of ‘lighter pieces’ from the Observer  by R.C. Robertson-Glasgow (writing in 1946).

“Alas, for our decline from romance to utility.  When eight-five years ago, H.H. Stephenson took the first England cricket team to Australia, the band at Melbourne played their guests into the field to the strains of ‘God Save the Queen.’  Imagine a band at a modern Test Match.  I suppose it is conceivable, if they played ‘Rock of Ages’ and the ‘Dead March in Saul.‘

Those same people are rather inclined to regret the advent of coloured clothing, and the numbering and naming of shirts.  I – I mean they – are also inclined (not entirely consistently) to complain that the wearing of helmets makes it difficult to tell which player is which.  But surely no-one with an ounce of poetry in their souls would, in the days when players were uniformly turned-out in crisp white flannels and severely classical caps, have wished it any different?  Well again, apparently, yes.

‘With what finery, too, that first team cheered and enlightened the spectators.  Each English player wore a very light helmet-shaped hat, with a sash and hat-ribbon of a distinctive hue, corresponding to colours set down in the score-card against each man’s name.  This gay conception died far too young.  I like to fancy Hendren in heliotrope and Sutcliffe in sea-green.  Douglas Jardine did his best with his Harlequin cap, but by then most of the Australian spectators were beyond the emollient influence of bright colours.

England and most of the Counties have settled to the uniformity of the darker blues, though Surrey struggle on with chocolate brown, Worcestershire with green. It is left to the Schools and clubs to illuminate the darkness.  Rugby still take the field against Marlborough in light-blue shirts, and the I Zingari cap shines like a beacon in the mist.  But it must be admitted that, in modern cricket, versicolority is apt to be rated as a sign of incompetence, until the contrary is proved.’

It’s possible that Robertson-Glasgow – had he lived long enough – would have been an enthusiast for the astonishing versicolority and the dancing girls of the IPL.  Or, perhaps, there are those who will always be inclined to hanker after something better than what they have, and who will – if hankering after the future seems too hopeful –  hanker after the past.

H.H. Stephenson was the first man to be awarded a hat for taking three wickets in three balls, and ended his days as a coach at Uppingham School.  He died in Rutland.

This is the side he took on England’s first overseas tour, en route to the United States in 1859 (a couple of years before they first toured Australia).  Stephenson is fifth from the left.  They do look appealingly raffish – particularly, I suppose, when seen from the point of view of austerity-frozen 1946.

In today’s news, I see that Jack Wills have been made to withdraw their Spring catalogue following complaints from parents.

(Two other complaints – that the catalogue might mislead ordinary middle-class children into thinking that they might be able to afford to go to University, and that Jack Wills had used the names of innocent English towns and villages (e.g. “The Hinckley shirt“) without asking permission were dismissed.  The ASA said that the first was “obviously politically motivated” and that the second “Isn’t really our problem“.

Let us try to maintain this new tone of levity, by going over to Mr. Answers to see what he has in his bulging postbag.  Any interesting enquiries yet, Answers?

“Thank you, BW, Old Fruit.  I have had this, from a Mrs. Muriel Dotterill of Market Drayton:

My family and I have been invited to an A-Z fancy dress party.  The idea is that you have to draw a letter of the alphabet from a hat and then go dressed as something beginning with that letter. Just our luck! – we drew the letter Z.

We thought about going as Zebras, but I’m not sure that my sewing skills are up to that.  Zombies, we thought, had been done too many times before.  Zoroastrians might be a bit obscure, Zionists or Zoophiles too controversial (Market Drayton is quite a conservative place!).  My husband suggested that he could go as Zeus and I could go as a Zeppelin – but I soon put him right on that one!  Then we thought – what about Zulus?  Trouble is, we’re not quite sure how Zulus dress.  Do you have any suggestions (making sure, of course, not to offend the dreaded “PC Brigade”)!!!”

Luckily for Mrs. Dotterill, I found that I had already researched this question for one of my contributions to Wkipedia, and had the answer ready for her in a trice, as follows:

Zulus wear a variety of attire. For example, the males may wear a suit and tie with leather shoes for formal occasions, whereas casual attire is more likely to consist of jeans and a T-shirt, possibly with trainers on the feet. In hot weather they may wear shorts. In cold weather they may wear a coat. When it is raining, they may wear a waterproof jacket, or carry an umbrella. Underwear consists of socks for both sexes, together with underpants for males, or knickers and a bra for females. Infants will usually wear nappies.”

So there we are.  It doesn’t look as though the Dotterils will have to stray too far outside their “comfort zone” to enjoy their party!!!”

To Northampton on Monday for what – for me – was to be the last day of the cricket season.  I picked the wrong day (particularly in light of what happened today (Taylor 158)) – though, in my role as chronicler of the dying way of life that is county cricket, I hope to report on it at some stage.

On the way I was disappointed to see that the osteopath’s whose imaginative window displays I have highlighted before (here  and here) have not yet produced a new display for Autumn.  But, as some compensation, I did pass a shop with the following in its windows: this for the ladies –

and this for the gentlemen – 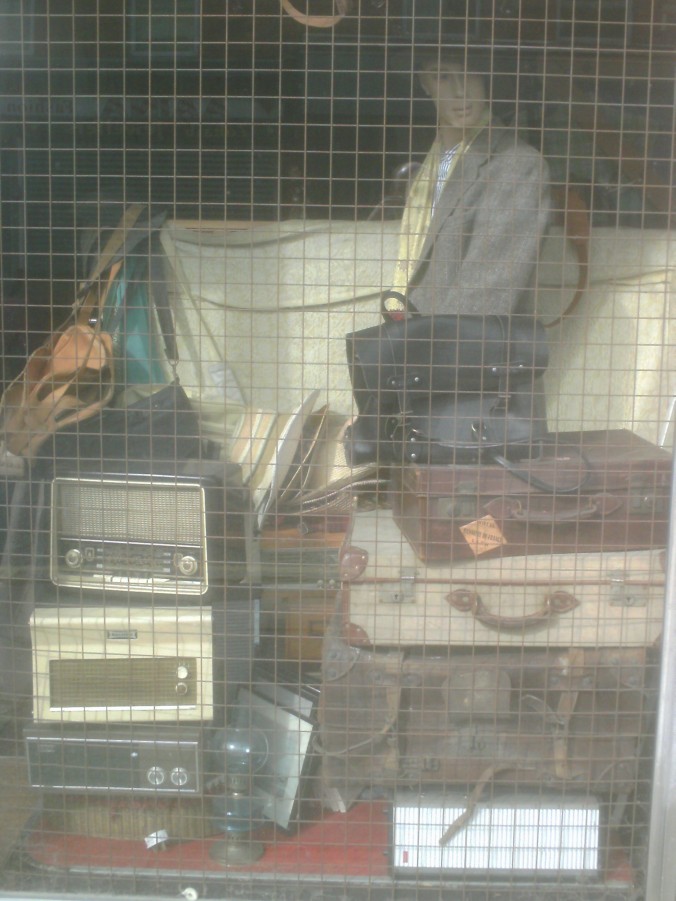 This is so far up my street that it’s practically in my front room – my eyes were popping out of my head and I was rattling the bars – but, unfortunately, it was shut.  Worth a look, though, if you happen to be strolling along Kettering Road (which – I accept – you aren’t all that likely to be).

(The shop is called Scrooge, and it has a website here.)

While I’m on a sartorial tip, have been watching England v the Netherlands at association football on the television this evening (I’m not really in the mood for an outbreak of weeping, so can’t quite face Kim Cattrall on Who Do You think You Are?).

Pleased to see that young Rooney has resorted to the use of Brylcreem, and that Beckham (not before time)has had a short back and sides.

Though Marina Hyde was a bit sniffy about it in the Guardian when it was launched – Marina Hyde on new England kit, I rather approve of the way they were dressed – slightly reminiscent of – say – Alf Common in his prime – (see below, compare and contrast) –

Wayne Rooney without cap, but accompanied by two lions

As you can probably imagine, I feel it’s crucial to keep up with the word on the street  about the latest trends in gents’ tailoring.  Thanks to Thelondonpaper‘s Carrie Gorman I feel I’m now clued in – Trends for Autumn 2009.

“True to form, one of the top fashion trends for autumn is to ignore your withered finances and dress as if you own half of Leicestershire. Nowhere on the high street has achieved such hierarchy [sic] as Topman whose “privileged” trend will filter in to stores shortly. Expect slimly tailored check trousers, shirts, tartan suits and double-breasted cardigans to mirror the life of a wealthy entrepreneur’s son on a budget [presumably it’s” you” on the budget rather than the “wealthy entrepreneur’s son”, damn him]”.

This is immensely useful information, as I now know that, if I spot someone swanking up and down Northampton Road in a tartan suit and a double-breasted cardigan, they may well “own half of Leicestershire”, and I can reasonably touch them for a fiver.

I do think Topman have rather missed a trick by not establishing some  kind of celebrity endorsement from Top Cat – waistcoats?  straw boaters? – I’d be round there like a shot.