Looking back at some of the photographs I’ve taken over the Summer, I’m thinking of initiating another of my blatantly populist, ratings-grabbing miniseries (in the great tradition of Stump Watch, Old Rossallians on YouTube etc.), to be entitled White Buildings That Have Seen Better Days.  Trust me, you’ll enjoy it.

This building doesn’t quite qualify, being black and white, but I thought I’d just note the demise of the Cherry Tree in Kettering, which has featured in a few entries previously in this blog.  Since the Kettering to Harborough trains were halved in number, I’ve often had an hour to pass in the vicinity of the station, and have taken to having a quick pint in the Cherry Tree.  Advertised as Kettering’s smallest and oldest pub (dating  from at most 1629) , it offered a novel mix of real ale, rugby union (a Leicester Tigers flag behind the bar) and (after nine) live Heavy Metal bands in a space not much larger than a spacious living room.  Quite loud, I imagine.

It is situated opposite what used to be the market square and is now intended to be the centre of Kettering’s “Heritage Quarter”.  This includes the Parish Church, the Library, Museum and Art Gallery and the old Corn Exchange.  In 1938 (1961 actually – ed.) Pevsner (o.g.) rather sniffily commented that these buildings “form the beginning of an effort towards a Civic Centre“.   The effort continues, I suppose, and I might one day find the energy to comment on this process in more detail..

But, in the meantime, if you fancy putting in a bid at the auction, this is what you’ll be getting. 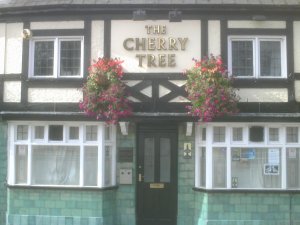 complete with a rather attractive Victorian lamp (originally gas? electric? I don’t know) –

No actual cherry tree, as far as I know.

The Evening Telegraph reported the matter like so.  Note the touching belief that our elected representatives have any influence in these matters, and the hints (in the comments) of a possible codger v metalhead split in the clintele.