What better to take our minds off the Ashes debacle than some cute pictures of animals (very popular on the Internet, I believe)?  So here are my New Year cuties.

First a pony, snapped on New Year’s Day in front of a huge mound of manure at Burrough-on-the-Hill, and looking pretty much how I felt at the time.  Thought by some to be local hero James Taylor’s battle charger. 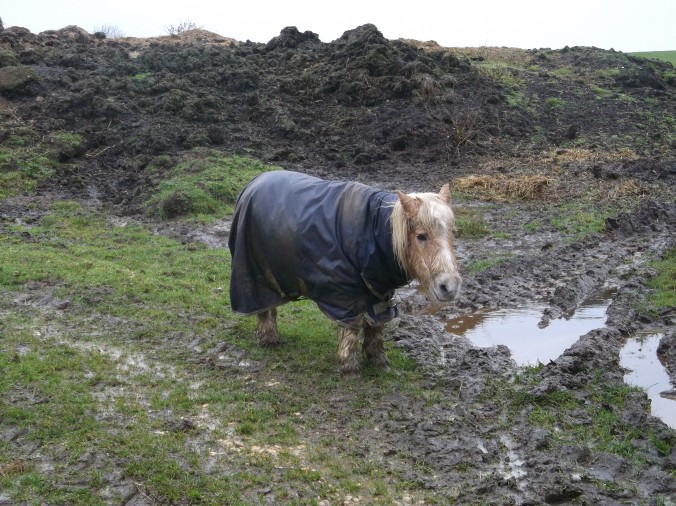 Secondly, a quick brown fox, taken not, as you might think, in Leicestershire but in the City of London on 2nd January (Leicestershire foxes aren’t generally as blatant as this, though they are considerably more cunning).

And lastly, the Harborough Otter in action.  This Otter (some think there are a pair of them) seems to be living somewhere near Sainsbury’s in Market Harborough and emerges about once a day to put on a show.  On Saturday he swam about for a bit, showed himself off on the near bank, then re-emerged on the far bank with a large fish which he proceeded to eat.  I can’t quite make out the species that he’s eating, but have a slight suspicion that the staff on the fish counter at Sainsbury’s are supplying him with a selection of their finest wet fish to keep the customers entertained.

No precise times available for his next appearance, I’m afraid,  but keep your eyes peeled.

There has been widespread condemnation this week, following revelations that unscrupulous employers have been putting hard-working models out of work by replacing them with mannequins.

But who has taken the place of the mannequins?  This blog has uncovered disturbing evidence that innocent woodland creatures are being forced to work long hours – sometimes as much as 24 hours a day – modelling clothes in shop windows.

and this reindeer in the Fred Perry shop in Nottingham – 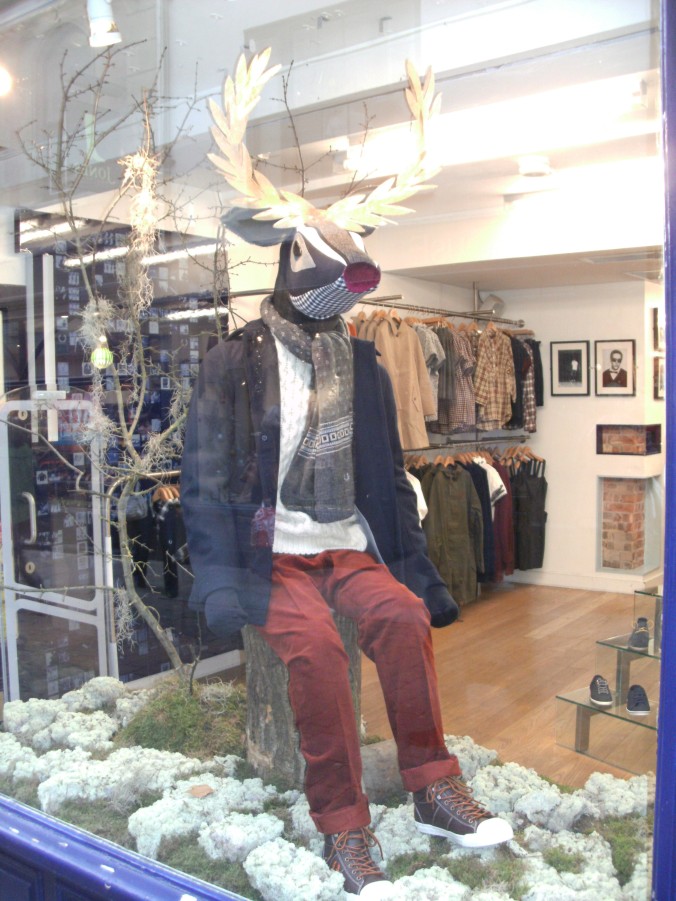 A spokesperson for PETA commented – “No animal in the wild would wear clothes or sit still for hours on end and forcing them to do can only be a source of enormous stress.  We urge our members to boycott any shops using animals as models and lobby their MPs to end this cruel practice.”

As regular readers (if any) may remember, last year we took an Autumn break in Andalucia.  This year, it was an overnight stay in Matlock Bath in the Peak District.

Like many spa towns Matlock Bath first became popular with the Quality during the Napoleonic Wars when travel abroad was an impossibility (as it is today, though for different reasons).  It became a favourite haunt of many literary greats, including Lord Byron (who compared it to Switzerland), Ruskin, Mary Shelley, Elizabeth Barrett Browning, John Betjeman and Roy Hattersley.

It has many attractions, some of which I shall share with you over the coming weeks.  But, first, if you are planning a stay in Matlock Bath (and you should be!) I can thoroughly recommend our hotel – Hodgkinson\’s. 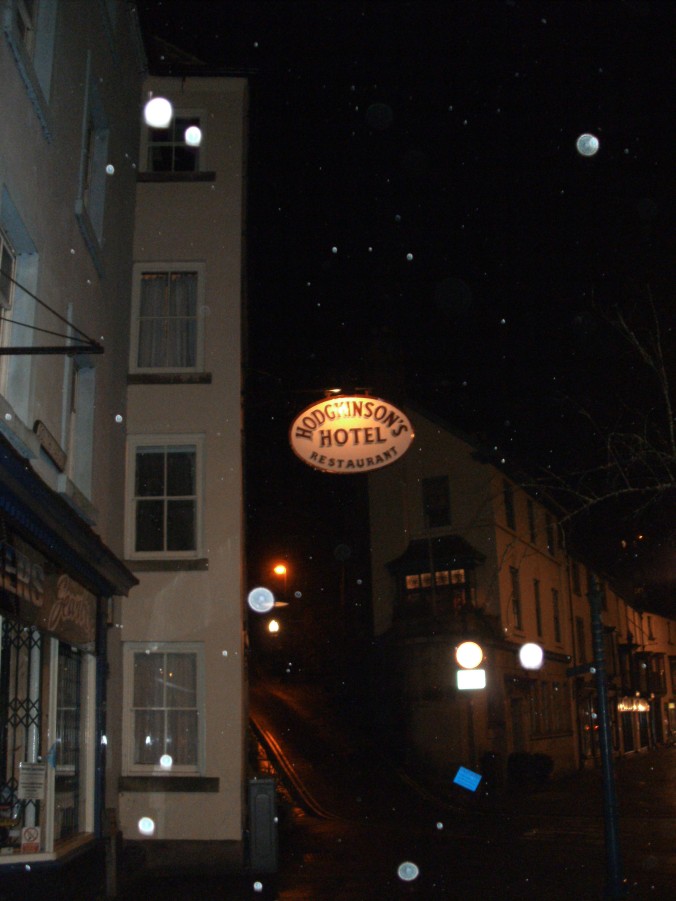 A Grade II listed building, decorated throughout in an authentic Victorian style, it offers comfortable beds, friendly and unobtrusive staff, a delicious breakfast, a roaring fire (is there any other kind?) in the living room and – to make us Leicestershire folk feel at home (and keep a theme of sorts going) – a FOX under one of the armchairs –

(n.b. this blog has received no payment for this Unsolicited Testimonial)

Meanwhile, back in the City of London …

The last few weeks have seen mixed fortunes for Foxes of various descriptions.  Foxy Loxy has been acquitted of murder, “Dr.” Fox has been forced to resign as a result of some incomprehensible imbroglio involving his “friend”, and – though I doubt too many tears will be shed in – say – Consett over this – I am sad to record the demise of J. Fox of London Wall, as a result, apparently, of “adverse trading conditions”.  It cannot have helped, either, that the rest of this late-Victorian block has been erased as collateral damage to the Crossrail works around Moorgate, leaving only the supposed birthplace of the poet Keats and a branch of the Carphone Warehouse standing.

As the frontage announces, J. Fox was founded in 1868, and specialised in the making and repair of bespoke umbrellas, supplying them to John F. Kennedy, Winston Churchill, James Bond and Steed of Avengers fame.

Quentin Lake, who has clearly looked into this more thoroughly than I have, describes it thus –

“The extremely stylish exterior was installed in 1936 and was, at the time, the latest in shop-front design. Curved non-reflective glazing later used at Heals on Tottenham Court Road was used for the windows, and the framework was made from black Vitrolite a type of black glass used in the 1930s and chromed steel. Two prancing silver foxes and a neon sign were the finishing touches. Inside, the shop is fitted with cabinets made of solid Canadian black walnut. The staircase boasts framed mirrors, with original advertising graphics dating back to 1868.”

Mind you, I suspect the real reason that this always raised my spirits so much whenever I passed it was that it reminded me of Grace Road.

To Grace Road on Monday, where, once again, the crowd were in bank holiday mood.  I don’t mean crapulously drunk and complaining about tailbacks on the M6, I mean jolly and relaxed, and who wouldn’t be with a 40 over match against Scotland in prospect?  Not to mention a hog roast, a LOROS stall, several bouncy castles, a second hand bookseller with a complete set of Playfairs going back to the early ‘fifties, a raffle and all the general jollity that accompanies a visit from Sky Sports.  A Churl, that’s who.

The 40-over league seems to be an oddity for professional sport, in that no-one seems to take it very seriously.  The County Championship is obviously a serious matter, 20/20 matters (if only because of the amounts of money involved), Tests matter, but in these games the cricket seems to be a sideshow to the sunbathing, drinking and raffles.

When asked as to who was likely to win the competition in the Wisden Cricketer, Paul Farbrace of Kent said “It’s names out of a hat this one“, Chris Adams of Surrey “It’s a wild-card competition”.  So relax – give it a go, seems to be the thinking.

Leicestershire batted first, with an experimental line-up, and showed very little sense of urgency against Scotland’s honest, but limited attack.  Josh Cobb (opening) helped himself to sixty-odd, which will have done him good, but none of the long handle boys seemed much inclined to take advantage.

James Taylor came in first wicket down.  The man described in the same edition of the WC as “Lilliputian in stature but gargantuan in his appetite for runs” and by Rob Smyth inThe Guardian as“A tiny man with an appetite for big hundreds” had stuffed himself to bursting point during the week with the third double century of his career against Loughborough UCCE, and didn’t seem to have much appetite left, but still – as a well brought up young man – tucked in, as it would have been rude not to, given that Scotland had provided him with such a generous buffet.  He finished with 81*, and a final scoop shoot over his head for four (perhaps he was looking forward to a visit to the ice-cream van).

I had to leave between innings, as the players strolled off and the crowd milled.  Leicestershire’s relaxed attitude proved justified, as Scotland fell comfortably short of their modest 253.

Taking the bus back to the station up Saffron Lane, we passed through the crowd of Leicester City fans flowing out from the Stadium of Crisps, which felt like being in a submarine breasting a shoal of exotic royal blue tropical fish.

While we’re on the subject of incursions on the pitch by the animal kingdom, my curiosity was piqued by this contraption – 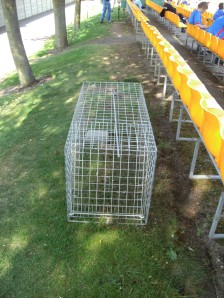 My first thought was that this was a run for rabbits or guinea pigs, and that, in these times of “austerity”, we are using them to mow the square, but I’m told that we, in fact, have a problem with foxes running wild at Grace Road, and this is a humane trap. 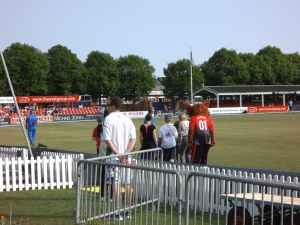 Meanwhile, elsewhere in the snowbound East Midlands, a fox had to be rescued by the emergency services after becoming trapped up to its neck in a snowdrift –

A spokesman for the Taxpayers’ Alliance commented – “At this time of austerity this is a grotesque waste of hardworking taxpayers’ money.  Surely this fox could have been left where it was until the snow melted?  And if it had to be dug out, surely that could have been done by volunteers?  As it this fox will soon be back in the fields and copses making a nuisance of itself.  If you ask me it’s health and safety gone mad …”

Will no-one think of the chickens! 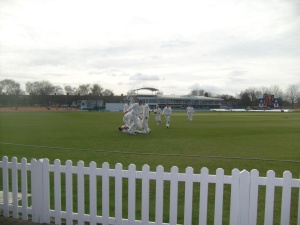 Well caught, Sir! Leicestershire team-mates congratulate A.J. Harris by knocking him to the ground and trampling on him

Blimey.  In the last game of last season, Northants beat Leicestershire within three days.  Today Leicestershire very narrowly failed to return the favour, but – assuming half an hour’s play is possible tomorrow – they are almost certain to win.  And they were lacking their new Aussie import, and Benning and Malik. I think I’m going to have to get used this, unfamiliar as it feels.  Amazing what a new Captain can do.

And here, by the way, is the shrine to James Taylor I mentioned yesterday.  With a stuffed fox on top of it, of course. 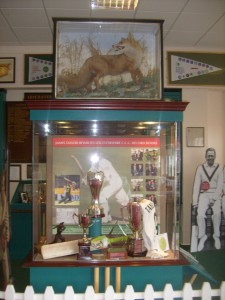 James Taylor and a Fox

The man sitting next to me in the morning, by the way, was reading this –

(Thucydides, Pericles and the idea of Athens in the Peloponnesian War, by Martha Taylor : C.U.P., 2009)

While I’m on the subject of the Wave of Crime engulfing Brown’s Broken Britain (c. most newspapers), where peaceful neighbourhoods are under siege by antisocial elements, see if you can guess which gang of folk devils are responsible for the following outrages, as reported by the Leicester Mercury –

“Neighbours under attack as quiet street is overrun

Residents say that their once quiet street is being overrun by ….. that attack people, destroy gardens and urinate in homes.  Many say that they are unable to sleep through the noise ….. create at night, while others are scared to go outside and confront them for fear of being attacked.

JU, 77, had his trousers torn by a …. after he tried to get it out of his back garden.  “The …. went to bite my leg.  Luckily it only bit through my trousers and not through my leg as well. ”

His wife, 74, said “They are getting worse around here and are causing a lot of damage to people’s property.  They have messed up our back garden a number of times”.

86 year-old OF had a shrub planted in memory of her brother dug up.  Another …. came in through her back door while she was gardening and fell asleep on her sofa.

JS, 77 said “They make loads of noise at night when they are mating and fighting and it’s hard to get to sleep.  There are broken fences all over the street which have been caused by ….”.

[The man from the Council] said “We’ve had lots of calls from the residents in that street.  They feel they are being terrorised. We’ve had reports of them being loud, destroying gardens, and one person said a …. had gone into a house and urinated inside.  A lady has also called us to say that she was bitten on the hand by one.  It is important that people do not feed them”.

So who is responsible for terrorising the neighbourhood in this way?  Who deserves ASBOs all round?

Nope, it’s Brother Reynard up to his old tricks again.  I blame the parents.