A fleeting visit to Newstead in Nottinghamshire, a former mining village whose colliery closed in 1987. 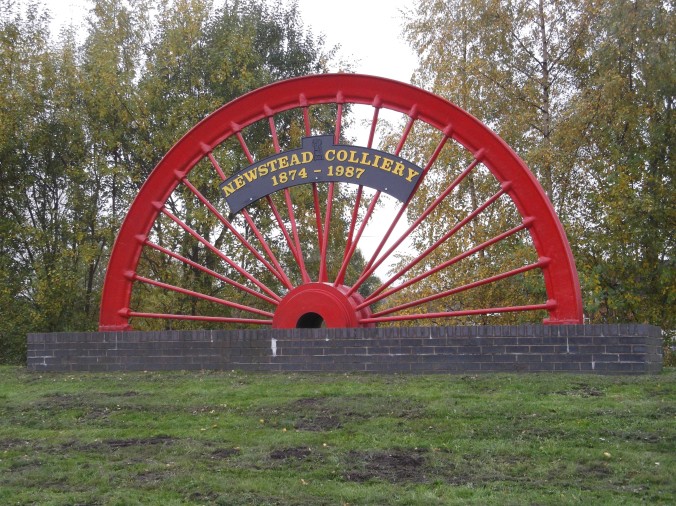 To the superficial eye it ticks the boxes for the identikit “former mining village”.  The rows of terraces are present and correct (though most look reasonably spruce). There is a vandalised phone-box (someone had ingeniously managed to weld a melted cigarette lighter into the coin slot).   Two hooded youths (straight from central casting) loitered outside the closed-down fish and chip shop and were asked by a passing old man in a flat cap “What’s the matter, lads, nothing to do?”.  So far, so predictable.

It is true that there doesn’t seem to be a great deal to do there.  It has a small Post Office and convenience store, a Primary School, a Community Centre (with a cafe, although that seems to shut at 2.00 pm), a Sure Start and a skatepark.  It also has its own railway station (which many villages would die for, or without) and a reasonably frequent bus service.  A little sleuthing shows that the village attracted some serious attempts in regeneration towards the end of the last decade, including the lottery-funded Village SOS project, which involved turning the site of the former colliery into a Country Park.  Ominously, there seems to be little trace of regenerative activity since about 2011.

Above all what it has going for it is its natural beauty, which would particularly appeal to lovers of deciduous forests in Autumn.  One contributor to the regeneration project described what they were trying to do as “healing the scars” inflicted upon the landscape by the industrial revolution (presumably an allusion to local boy D.H. Lawrence).  It seemed to me at least as much like the sands of the desert steadily removing all trace of human habitation, but no doubt that it is merely a matter of temperament.

Inevitably, as a barely regenerate Man of Sensibility, what moved me most were the ruins rather than the signs of renewal.  Close by the railway station is this –

What appears to be a functioning football pitch, overlooked by a cricket pavilion and ringed with benches, suggesting that cricket has been played here in the not too distant past.  The story appears to be that Newstead Colliery, a strong side in its heyday who produced several County cricketers (this is Larwood country), merged with nearby Newstead Abbey in 1987 when the Colliery closed and their former ground was purloined for a housing development (though much of that is still scrubland).  The merged club continued until earlier this year, when it disbanded through a lack of players.  The hands on the pavilion clock have been broken off, but they seem to be stuck permanently at about 12.20 (so it’s unlikely that there will be honey, or anything else, for tea).

On the other side of the station is this – the Station Hotel (the rail history of Newstead is complicated: in its heyday the village had two stations, both shut by the 1960s.  Almost miraculously, the Robin Hood line was reopened in 1993 thanks, initially, to support from the local Council) –

a rather lovely building to my eye, and the only pub in the village, but no longer open for business, a small notice in the window plaintively advertising “Public House for sale“.

The delicate lettering on the frontage records the date 1911, although a local source indicates that it opened in 1881.   As recently as 2008 the hotel was receiving plaudits for its choice of real ales and beer garden, it seems to have hosted musical evenings, but, like the Cricket Club, it met its end earlier this year.  If I had the money, I’d be tempted to buy it myself.  Part of its appeal is simply that it is a railway hotel, a fossil from the days when it was assumed that it should be possible to step off a train and find a bed for the night, a decent supper and a nightcap in a companionable snug.

But, inevitably, there is a melancholy tinge to these pleasant imaginings : the conclusion of Larkin’s “Friday night in the Royal Station Hotel”:

In shoeless corridors, the lights burn.  How

The headed paper, made for writing home 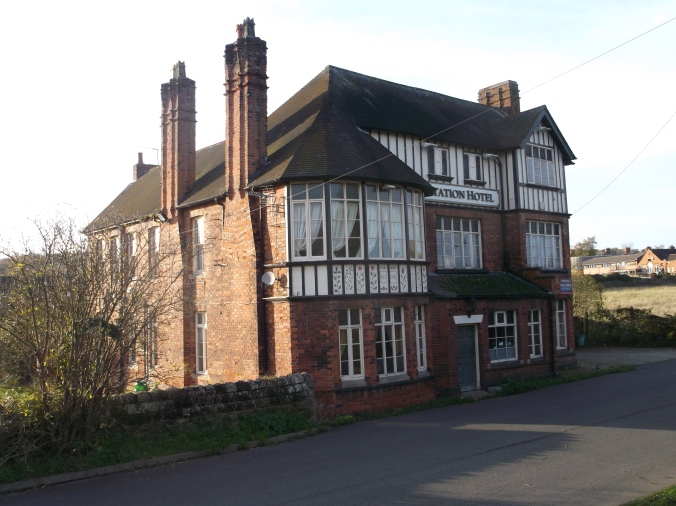 8 thoughts on “Waves Fold Behind Villages : A Brief Glimpse of Newstead”