I’m always inclined to be a bit sniffy about cricketers who complain that there’s too much cricket played (as most of them do).  I’m sure there are accountants who feel that there’s too much accountancy.  If I only had to work three days a week I’d be much fresher and better able to perform to the peak of my abilities.  But after having spent three out of the four days of the Jubilee weekend at Grace Road I’m beginning to see their point.  It felt too much and by Tuesday I was almost looking forward to not returning there until the County Championship resumes at the end of July.

The Jubilee itself was not greatly in evidence.  A bit of bunting and a mostly limp flag to the right of the Charles Palmer Suite.

The first of the three matches was against the West Indies.  I’ve been following the progress of the ’76 tour through back copies of the Cricketer recently (mostly in the Meet when it’s been raining).  They played 26 first class matches (winning 18) and ended the tour on 8th September with a 50 over match against a Northern Leagues XI in Harrogate.  This year they’ve played, I think two matches other than Internationals and this 2-day affair, which was presumably arranged to give them a little practice in between tests. 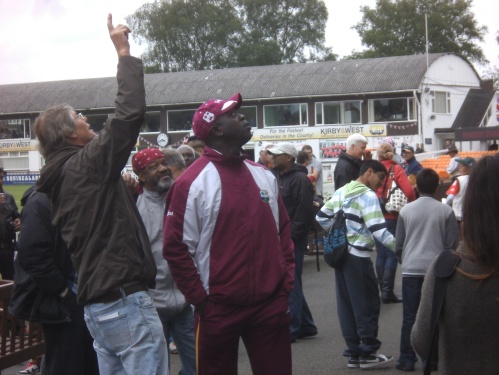 and there was just time for Bravo and Barath to show that they can make runs against a depleted Leicestershire attack comprising Robbie Joseph, a couple of promising teenagers (Thakor looking good), Harborough’s own Rob Taylor and Nadeem Malik (Hoggard and Buck had been rotated out of the side).

I’d imagine that the ’76 side proceeded around the country in an almost visible cloud of majesty and awe and would have been mobbed by the local West Indian population wherever they went.  This side seemed a small scale operation, attended by a few camp followers who set up camp in the Charles Palmer Suite, but friendly and approachable.  Chanderpaul, in particular, who wasn’t playing, was happy to delay his lunch to chat with some autograph hunters and others (noticeably as many Asian as Afro-Caribbean).  Even without his sponsored war paint he has an amazingly intense gaze, like some kind of fierce small wildcat suprised in a bush by a flashlight. 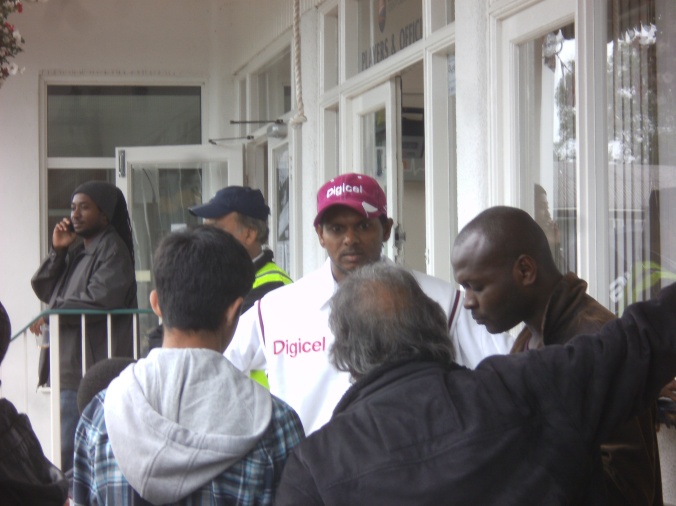 In the absence of our few more experienced players, it did give some of youngsters a chance to get a feel for what it would be like if they could stay together and become a formidable side in five years time (which, of course, they won’t).

One day all this will be ours! Unless we’re playing for Nottinghamshire.

Sunday was washed out (by way of variation I spent it listening to a brass band in torrential rain).

Monday saw the visit of the Netherlands.  At Grace Road we like to make our visitors feel at home, and someone had thoughtfully placed this in a window of the pavilion (technically Belgian, but it’s the thought that counts)

If you’d had to guess which of the two sides were the Test-playing side with an awesome history and which the Associate nation I’m not sure it would be a simple matter, except that Holland (the side and their followers) had the feel of a side on the way up.

Although all the players (except their overseas man) are qualified for Holland through birth or residence, they have arrived there by various routes – via Australia, South Africa, England, Pakistan.  I sat between a charmingly dry man from Warwickshire who was the grandfather of one player and a family of Manchester-Pakistanis who were the cousins of another.

The Warwickshire man (who explained that he hadn’t been to Leicester since 1949 – “It was a very diferent town in those days, of course”) turned to me after a few overs of Holland’s innings and asked “Tell me – is this a typical Leicestershire attack?”.  Well, yes and no.  This time Hoggard and Joseph had been left out (I get the impression we’ve written this competition off and are putting all our eggs in the T20 basket) but – without going into details – it was a pretty woeful performance.  The Dutch made 304-3.  When Leicester came out to bat I suggested to my new companion that if they could get our openers out early they shouldn’t have too many problems.  Cobb was out for 0 in the first over and – in spite of a century for Sarwan – there never seemed any likelihood of us reaching the target.

Tuesday saw the arrival of another well-motivated and cohesive side who have built up a head of steam this season – Derbyshire (currently top of Division 2).  Winning this match (unlikely anyway given the weather forecast) was pretty much our last chance to have a chance of promotion this season.  Leicester won the toss and chose to bat.  7-3 ten minutes after the start with a hat-trick for Palladino.

Although we did well – after this start – to make it to 177  it was a day to be endured rather than enjoyed, constantly on the verge of rain and bitterly cold.  Amost every conversation I had with other Members was gloomy  – about Monday’s bowling, Tuesday’s batting, the smoking ban, a perceived lack of leadership, the club’s attitude to the members, the weather …  But perhaps an improvement in the weather and a successful T20 campaign will change that.

I suppose one reason for the Netherlands’ visible enthusiasm and closeness

was that they are a semi-professional side (mostly) and these matches are the highlight of their reason.  For some of the Leicestershire side (and those of the Membership who attend every match – which is the majority) it must have been just another day in what’s already been a wearisome and frustrating season.

Matthew Hoggard’s head down into the wind “ploughman trudge” seems to be getting more marked as the season progresses, and you do wonder how much longer he’ll be prepared to just keep buggering on like this. 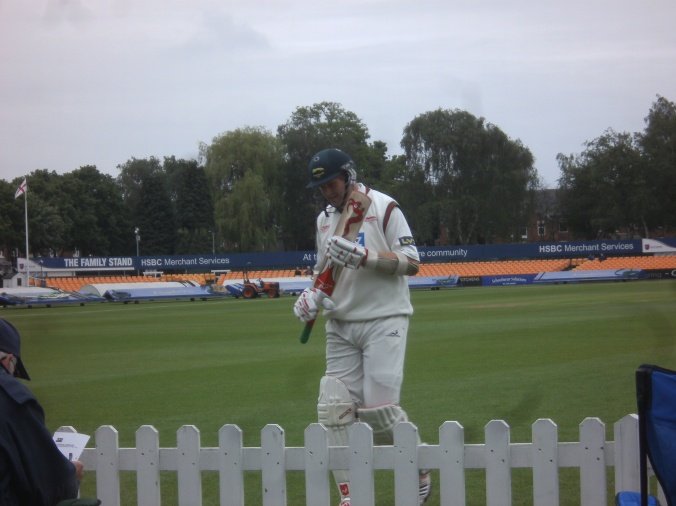